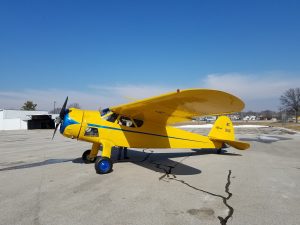 The C-34 was the first Airmaster  The C-37 had a wider cabin, improved landing gear and electric flaps. The C-38 had a taller vertical tail, curved main gear legs and a landing flap under the fuselage. The final revisions of the C-34 were the C-145 and the C-165, of which 80 were built. On these models, the belly flaps added on the C-38 were removed and the overall length of the fuselage was increased. The only difference between the C-145 and C-165 was the engine horsepower, with the latter having an upgraded 165 hp Warner engine.